Car on the island – a luxury or a necessity?

By: Kateryna Livshyts January 10, 2020 no comments

Car on the island – a luxury or a necessity?

Anyone can buy a car in Northern Cyprus. It is absolutely optional to have the status of a resident of TRNC, and you can buy a car with a tourist visa.

When buying a car in the car dealership, its profit is initially included in the price, therefore all the formalization will be done with no additional cost.

Instead of “give way” signs in Northern Cyprus, there is such a sign: DUR, which can be translated as “STOP”. 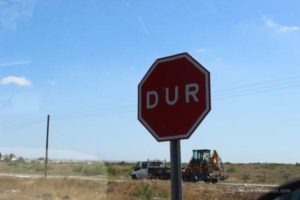 On highways, a lot of people exceed the allowed speed of 100 km/h and drive at a speed of 120-160 km/h, despite the fact that there are many signs that photo and video surveillance are being conducted on the roads. Sometimes policemen can use speed radars. The fines here are very high. Pedestrians are usually given way here, as well as in Europe.

It is very important for car owners to keep track of three documents:

1) MOT (Ministry of Transport Test) is issued for three years. It can be obtained in the traffic police department. In Kyrenia, this department is located in an alley to the left of the Kombos salon (Mr. Pound, Yaprak Tantuni area). This is similar to worldwide car maintenance. An important nuance – everything can be done and executed after you provide them with documents for the exhaust. This can be received in any car service with the appropriate equipment. The price is about 100 TL. Another 100 liras must be paid for MOT. The exhaust examination document remains with you.

2) Road Tax (transport tax) is paid at the tax office. In Kyrenia, behind the Akcicek hospital. It is calculated depending on the age and weight of the car. Taxes for SUVs, for example, can cost about 2,000 TL per year. For sedans under the age of three years – 800-1500 TL (on average).

3) CTP – compulsory insurance. Cost is calculated based on a number of indicators. The policy is usually done for a year. Car insurance is dealt not only by insurance companies but also by banks that have either contracts with major insurers or their in-house insurance department. So feel free to contact both the bank and the insurance company directly.

There is also CASCO, but it is not very popular in Northern Cyprus. There is simply no point in insuring against theft – after all, the crime rate here is just infinitesimal, and there is no way to escape the island unnoticeably, thus a lot of people leave their cars open. However, newly arrived citizens, when buying a completely new car prefer to apply for a CASCO policy at least for the first year.

Having a car on the island is very important. No, it’s absolutely necessary! This is the freedom to choose the route and time of the trip, this is the opportunity to discover the best places on the island! In addition, this will allow you to save money on accommodation: apartments a little further from the sea are always cheaper, and driving to the beach by car for 5-10 minutes is not difficult at all, and you can choose to visit any beach that you like best.

But the thing is, a taxi in TRNC is not cheap, and finding it is not as easy as in Europe. Taxi cars here are quite elite and well-groomed.

The cost of a trip, for example, from Nicosia to Kyrenia will range from 120 TL to 180 TL (about $ 20-30), from Alsancak to the center of Girne 30-50 TL ($ 5-10), while it takes approximately 10 minutes. Public transport (minibusses), operates strictly along the main road, without turning onto the rest of the roads. But it costs 5-7 TL in the city. Thus, over time, you either tolerate late-coming taxi drivers and prices for this service or buy a couple of pairs of comfortable shoes and walk a lot. Luckily, the island is great for walking. However, during summer months under the hot sun, all roads will lead you to the sea!